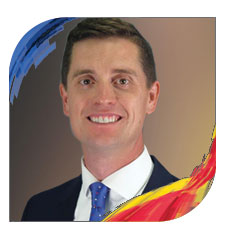 Sean Murphy currently serves as the Executive Director and General Counsel for the Arizona Dental Association (AzDA). In this role, Sean works with the AzDA team to provide advocacy, continuing education, and valuable benefits to Arizona dentists and dental specialists. Prior to joining AzDA, Sean worked for the American Association of Orthodontists (AAO) and brings with him a wealth of association and advocacy experience. Sean joined the AAO in 2016, and his responsibilities included managing the AAO’s legal and advocacy department, overseeing the AAO’s regulatory and legislative priorities, administering the AAO’s state Component Legal Support Fund, assisting with AAO governance, and handling the AAO’s legal issues. Sean has also lectured throughout North America on various dental topics, many involving the business and legal side of running a practice. Sean co-authored “Obstructive sleep apnea and orthodontics: An American Association of Orthodontists White Paper.” In 2019, Sean was selected by Association TRENDS as a leading lobbyist for the 2019 Salute to Association Excellence event and received a 2019 In-House Counsel Award from Missouri Lawyers Media. Sean grew up in Rock Island, Illinois and both his father and brother are dentists and ADA members. Sean received his bachelor’s degree from Augustana College and his law degree and health law certificate from Saint Louis University School of Law, which is frequently ranked as the top health law program in the country. Prior to joining the AAO, Sean was a business litigator for seven years at a national law firm, Thompson Coburn LLP (with offices in St. Louis, Chicago, DC, and LA), where he represented national and international companies in countless disputes. As a litigator, Sean was selected to the 2014 and 2015 Missouri & Kansas Super Lawyers’ Rising Stars Lists and was selected to the 2012 Missouri Pro Bono Hall of Fame.